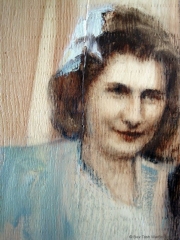 Olga, a Dutch war bride, made a pattern and sewed her wedding dress from part of a parachute. It was light green and went well with her husband’s uniform. After raising a family in Canada, the couple returned to Holland to pursue their life work Project Roots, connecting Dutch war “children” with their Canadian fathers. In 1997, Olga was decorated by Queen Beatrix for her contributions. 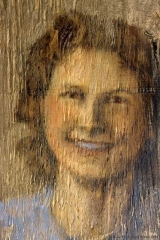 “Joan met her husband John at a dance. She singled out the shy, 6-foot-6-inch, red-haired Canadian during a spot dance. The first young woman to kiss ‘the tall Canadian’ would win. On a dare, the ‘5-foot-and-a-bit’ Joan pushed John onto a chair, sat in his lap, and kissed him.” 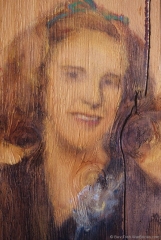 “Joy was not wanted. When she arrived in Canada, her husband met her accompanied by another woman, who was pregnant. He asked for a divorce.” 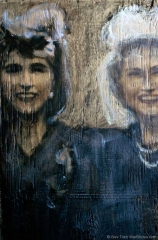 “First cousins Kathleen and Eileen were married to Newfoundlanders in a double wedding the day before D-Day, 6 June 1944. The church organ could not be heard, and the ground shook as tanks, trucks, and heavy artillery roared by towards the English coast.” 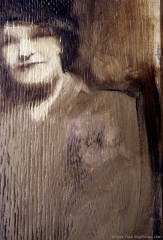 “After the dishes were dry, Lilian, a war bride in Ontario, would spread out the damp tea towel and tell her son her family stories. Printed on the towel was a map of her hometown, York. Years later, when her son travelled to York to meet his mother’s family, he navigated solely from the memory of that old tea towel.” 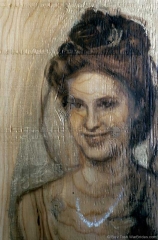 “Cathie walked up the gangplank — but not back down. Leaving Scotland for the desolate coast of Newfoundland, and a husband in civilian clothes, was not for her. She took one look, returned to her cabin, and removed her hat, intent on going home. Cathie had to be carried ashore.” 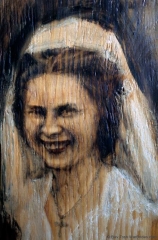 “Teenaged Joan stepped outside her home just as a young French-speaking soldier was gesturing to his bicycle and to her parents’ yard. He was on his way to the cinema. Could he leave his bicycle there? Spotting Joan, he added: ‘Her . . . me . . . to the pictures?’ She went.” 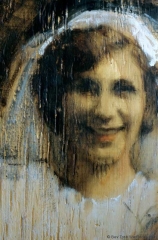 “Winnie had no husband waiting to meet her in July 1946, when she arrived in Canada as a widow with their two little daughters. On their first day at the family home in Saskatchewan, the girls were playing outside when the noon-hour siren sounded. Both ran into the house screaming that the Germans were coming.” 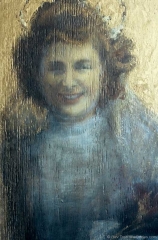 “Jean travelled during wartime on a troop ship, sharing a cabin with 16 other war brides and children in triple-tiered bunks. She became a founding member of the ESWIC Club (England, Scotland, Wales, Ireland, Canada Club) started by the Red Cross in Ottawa in 1945. In 1975, Gloria founded the first provincial War Bride Association in Saskatchewan. It became the model for other chartered provincial associations.” 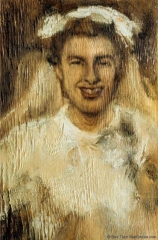 When Nan first saw her painting, she recalled the black tooth – the result, she said, of her bicycle being
hit and dragged by a Nazi vehicle during the war. Her Canadian boyfriend dubbed her old bike with
garden hose for tires, “Jannigje’s Dutch tank.” 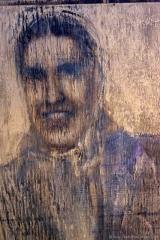 Her new Canadian family sent white fabric and shoes to Elly, a Dutch war bride, who had
nothing left after the war. The package never arrived. Elly was married in an army blanket tailored into
a suit. It was a U.S. army blanket – “the real khaki” – and finer than Canadian issue. Her husband never told her how he got it.